Who was En no Gyoja?

En no Gyoja, who was active in the 7th to 8th century, is considered the founder of Shugendo and Katsuragi Shugen. Also known as En no Ozunu, he was probably born in 634 in Katsuragi (present-day Gose, Nara).
There are many legends concerning En no Gyoja. He is said to have had two faithful demon servants, Zenki and Goki. He had supernatural powers that allowed him to move freely across the sky and mountains. He was once banished to Izu-oshima Island, but according to legend he crossed the ocean on foot every night to the mainland and climbed Mount Fuji. His life remains a mystery, and most of what we know today comes from popular lore. But he is mentioned in the Shoku Nihongi, a creditable source of ancient Japanese history written at the end of the 8th century.
After establishing Katsuragi Shugen, En no Gyoja moved to Mount Omine (Nara Prefecture), where he continued his ascetic training. The Yoshino/Omine area is a sacred place that has been registered as part of a UNESCO World Heritage Site. For shugenja (Shugendo practitioners), this area is just as important as Katsuragi Shugen. 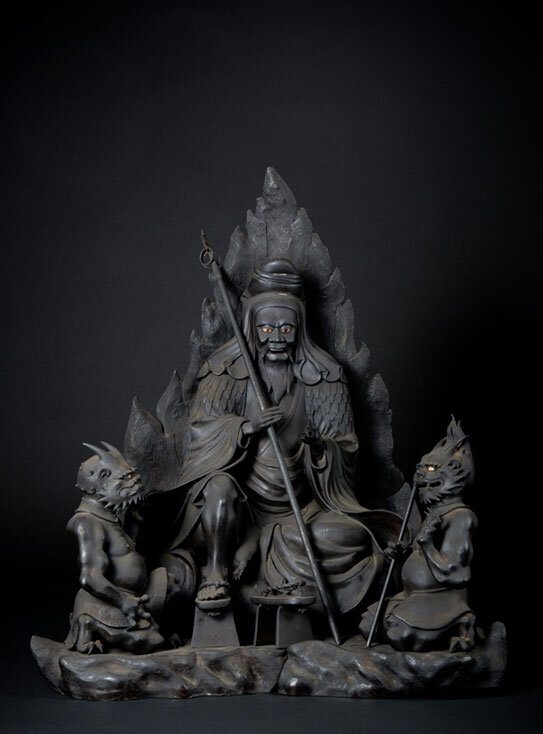 Shugendo is a unique Japanese religion based around the ancient worship of mountains. Practitioners retreat to the mountains to undergo strict ascetic training, with the goal of attaining enlightenment. Shugendo fuses Buddhist and Shinto practices.
Because devotees climb wild, rugged mountains, they have come to wear highly functional attire--much like today's mountaineering wear. Besides being convenient and allowing easy movement, the Shugendo outfit also embodies the teachings of the Buddha in various forms.

The outfit comprises clothing and tools. The main clothing items include: 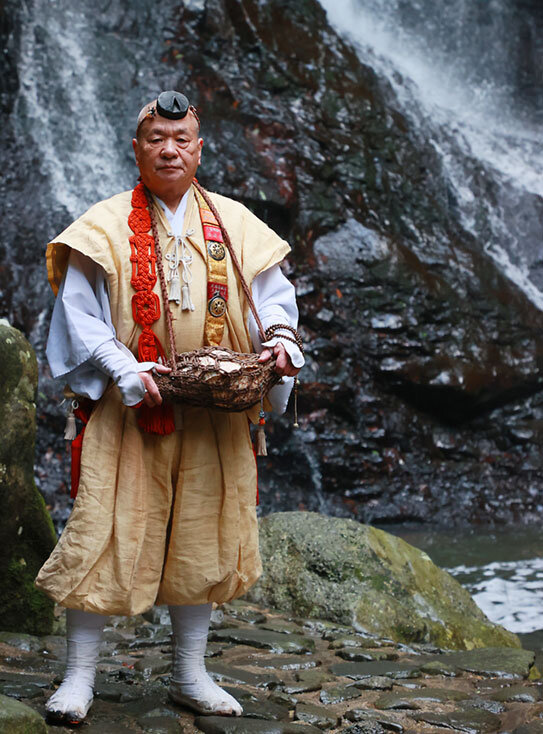 En no Gyoja likened the mountains of Katsuragi to the world of Buddhism. He put each of the 28 chapters of the Lotus Sutra in a dedicated container and buried them in various places in the mountains. The 28 places where the sutras were buried are called kyozuka (sutra mounds) and are sacred sites central to the Katsuragi Shugen belief system. The pilgrimage to the 28 sutra mounds begins at a place called Johon on Tomogashima Island in Wakayama, travels west to east along the Katsuragi mountains, and ends at Kamenose by the Yamato River. The route is also dotted with other places associated with En no Gyoja--namely, places where he did his ascetic training. Major training sites can be found in Meisho Zu-e illustrated guidebooks published in the late Edo Period (late 18th to early 19th century).
Many of these places remain sacred training sites, just as they're depicted in the ancient Meisho Zu-e guidebooks. One example is Inunakisan Shipporyu-ji Temple. Here, members of the public can try Shugendo training for a day. Through waterfall meditation and other training, visitors can get a glimpse into the mysterious world of Shugendo.

Leaning out over a cliff, a Shugendo training exercise

Published in 1850, Katsurei-zakki plays a key role in explaining Katsuragi Shugen to a modern audience. The author conducted field research to find the locations of the 28 sutra mounds, many of which had become lost. The book details their locations and how to reach them. It's like a modern-day tourist guidebook, and even today serves as a guide to Shugendo devotees.
The routes described in this book connect dips in mountain ridges, places in the mountains where you can rest overnight, lodging, temples, and other features of note. The essence of Shugendo is to make a pilgrimage to these sutra mounds and sacred sites. Today, these routes overlap with the Diamond Trail, a popular hiking trail, and are gradually being improved to make it easier to walk. There are signposts and information boards, and parts of the routes are becoming easier to access for people other than Shugendo practitioners. 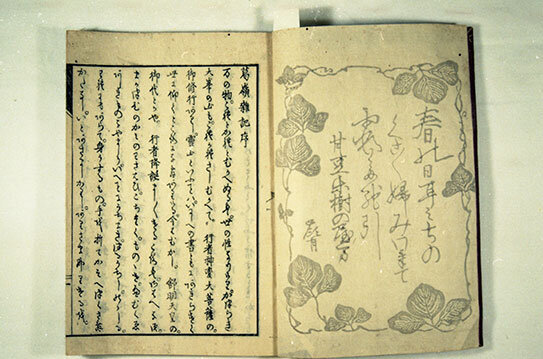