Hike up Mount Nijo and visit Shugendo sites at the base

Mount Nijo's relatively moderate height and well maintained trail make it easy to walk up, even for novice hikers. On the Odake Peak of Mount Nijo is Daranihon, sutra mound #26 of Katsuragi Shugen. Here's an itinerary that lets you enjoy hiking in the mountains, visit Taima-dera Temple at the base, and drop in to shops popular with locals. 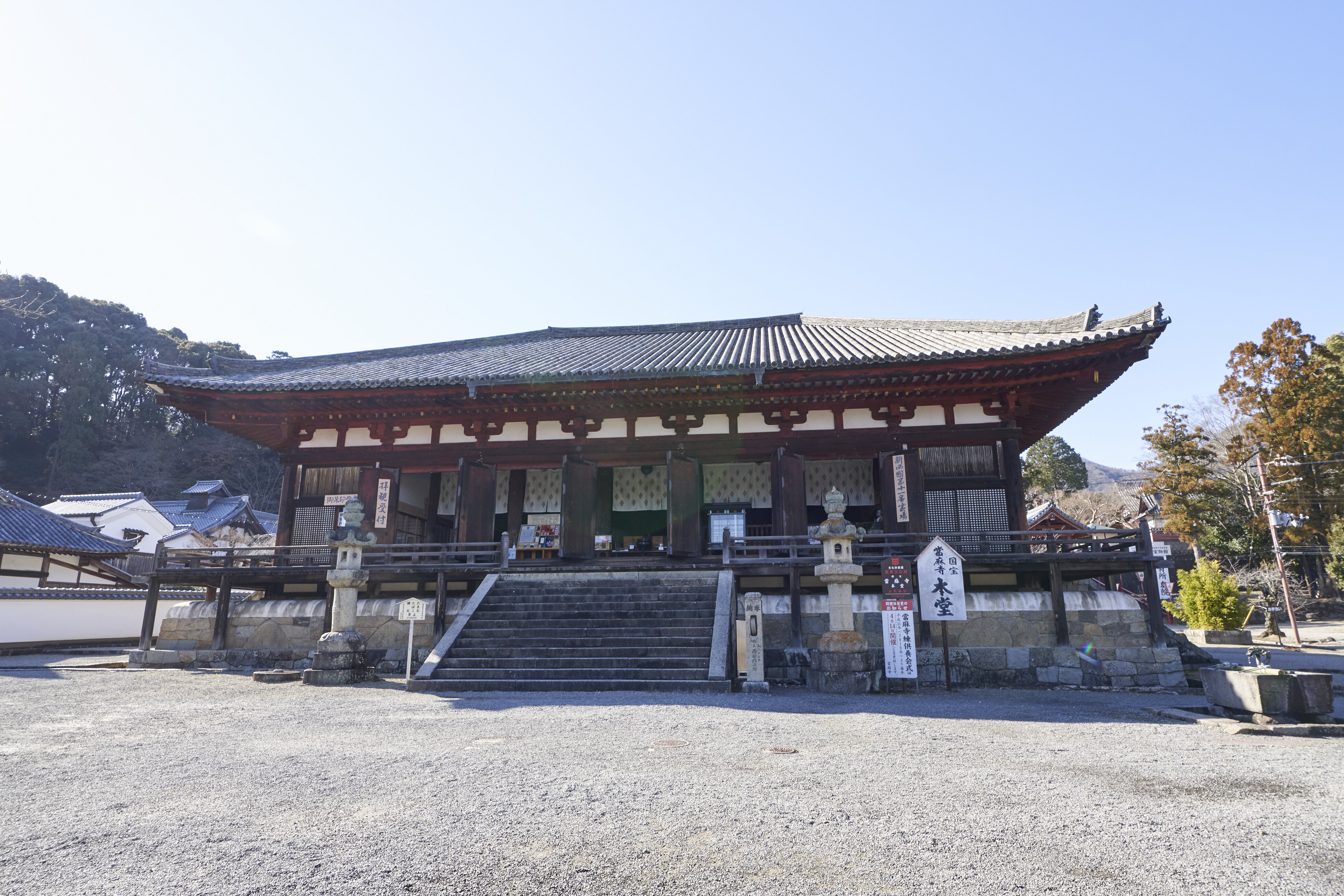 Taima-dera Temple dates back to the Asuka Period (592 to 710)
Enshrined in Nakanobo is the Guiding Kannon, the principal object of worship, which protects Princess Chujo

This ancient temple dating back to the Asuka Period (592 to 710) is believed to have been built when Taima no Kunimi relocated Manpozo-in Temple, which had been built by his grandfather, to the eastern base of Mount Nijo. There’s plenty to see here as the temple precincts are home to designated National Treasures including a temple bell and main hall, as well as Nakanobo and other monastery buildings. Nakanobo is the oldest of the subsidiary temples of Taima-dera. From mid-April to early May, the peonies of the inner garden are in bloom.

Kasa-do has been designated a Tangible Folk Cultural Property by the Nara prefectural government. Its distinct construction features a pyramid-shaped, clay-tile roof supported by one square central pillar measuring approximately 40 cm on each of its sides. Kasa means “umbrella” in Japanese. It was built in the early Edo Period (17th century) after the death of Honda Masakatsu, lord of the Koriyama domain, who once ruled this area. There is a miniature shrine at the top of the east side of the central pillar that is said to have held an Amida Buddha statue. A temple bell used to hang under the eaves on the structure’s north side.

You can sit at the counter, or next to the large fish tank
The panini set comes with a drink (1,200 yen)

A short walk from Kasa-do you’ll find an exposed concrete building that exudes a contemporary feel. The chic interior features Italian furniture chosen by the cafe owner and an aquarium with rare freshwater fish such as alligator gar and river stingray. Let the gently swimming sea creatures soothe your mind as you enjoy freshly brewed coffee and home-made sweets.

If you’re looking for souvenirs, check out this roadside station (rest area) at the base of Mount Nijo that is popular with hikers. It’s all about local production for local consumption here: the many specialty goods and the huge selection of bread and sweets baked fresh on site make for a mind-boggling selection. The home-made cheesecake (421 yen for the small size) is a big seller; in fact, many people order it in advance before it sells out for the day.

Odake Peak, Mount Nijo (and walk to and from Medake Peak)

The twin peaks of Mount Nijo: the 517-meter Odake and the 474-meter Medake

Walk approximately 10 minutes from Umanose to reach the top of the Odake Peak. At the summit and surrounded by sakaki trees is sutra mound #26 of Katsuragi Shugen. The mound is marked by an upright stone on top of a heap of natural stones. It’s worth taking the 15-minute walk to the top of the adjoining Medake Peak, where you get a stunning panoramic view of not just the surrounding mountains but as far away as Osaka Bay.

After your hike, take a walk down memory lane at this variety store that the owner has decorated with his favorite era: the mid-to-late 20th century. Inside you’ll find nostalgic knick-knacks and toys, as well as artists’ works everywhere you look. You’d be excused for thinking you’ve stepped into a bygone era. Drop into the cafe, or take off your shoes and enter a relaxing, homey atmosphere.

The shrine sits in Anamushi, where remnants of an ancient highway still linger

A dignified shrine sits at the top of stone stairs. Locals know it as a sumo shrine, a place that years ago came alive with revelers at the annual autumn festival.